As I mentioned in my last post, I recently spent a long weekend in Salem, Massachusetts.

My primary reason for going was to join The Sisters Enchanted in a weekend of self-reflection and exploration of Tarot, astrology, and other “weird stuff,” as my boyfriend describes it. The truth is, I’ve felt something of a lack of community with other women lately. The hard, beautiful truth of making friends in college & grad school is that they become deeply, truly your people and then they go off into the world. Bits and pieces of my heart are scattered all across the country, where I often do a terrible job of checking in with them (hello, you know who you are, I hope you are well). So the idea of spending a long weekend in a house full of women spoke to me on a deep, soul level as a way to experience the connection I craved.

There’s nothing that says “get outside your comfort zone” for someone with social anxiety quite like voluntarily committing to an entire weekend in the company of total strangers. I’m guilty of spending a lot of time in my safe bubble, but when I do decide to take a leap, I leap hard.

(Anyone else remember that time I took a 48 hour Greyhound ride to Idaho? Just me?)

When I arrived in Salem, it was 11pm. I’d been driving someone else’s car for about 5 hours, an anxiety-inducing and hyper-aware experience. I was exhausted.

Most of the other women were already asleep, so I tiptoed up to the attic room I’d been assigned. I had no idea what to expect when I woke up the next morning. Who were the other women in this house, and what would they be like?

Used to waking up before everyone else, I tiptoed down the stairs for a shower only to be surprised by someone already making coffee in the kitchen. This was the first tip that I was in a house full of many, many mothers. As everyone woke up and began making conversation, it quickly became apparent that I was one of a few childless women, and one of the youngest, as well. The “fish out of water” feeling I’ve been nursing my entire life came flooding back.

Because I’ve been a part of the University where I work for nearly three years now, I have my daily routines, my usual people, my prescribed roles. I forget about my social anxiety for days, sometimes weeks at a time. But as soon as I sit around a table with a bunch of strangers, that silence falls back over me. I remember being the kid with no one to sit with at lunch, the girl terrified of being left out but scared to speak up.

I knew I would have little to contribute to the conversation when it came to kids. Instead of resisting this, or feeling like a failure for my silence, I decided to try leaning in, instead.

What if instead of resisting my quiet, I wore it comfortably? What if, instead of panicking that I wasn’t participating in the group the right way, I just… did what felt natural?

So, mostly, I listened. And I learned a lot about women who are different from me, but were in so many ways similar.

Together, we explored the city of Salem, a city with a complicated and contradictory history. We shopped, saw sights, ate good food, and even went to the beach. 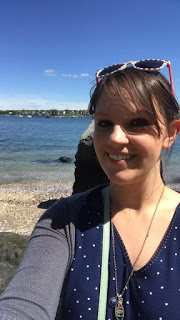 In between our explorations as a group and on our own, we also learned a bit more about Salem and its history. The women (and, to a lesser extent, men) who lost their lives in the Witch Trials were not witches. In fact, they were such devout Puritans that they refused to do the one thing that would have saved their lives–make a false confession to witchcraft, which they viewed as a pact with the Devil. Their memorial is easy to miss–simple rock slabs in a small enclosure resemble benches if you don’t look closely enough to see the names etched into them. I’m told that during the heavy tourist season, people can be seen using the memorial slabs as benches while enjoying a snack.

In the witchy craze that’s enveloped Salem since then, the memorial and history can get a little bit lost. People visit for the witchy stores, the Harry Potter wand shop, the Bewitched statue, the filming locations from Hocus Pocus. I can’t help but think those who died denying witchcraft would be a little bit, well, pissed off to see what their city had become.

And yet another layer to Salem is this: There’s a real community of witches, Wiccans, and other pagan practitioners who’ve gravitated towards this space and made it home. What once was a place known for rejecting anything outside the mainstream is now a haven for the weird, the wild, the magical.

I’m still parsing out my thoughts on this strange, multi-faceted city, where those who embody the label witch with pride live alongside the memory of those who died to deny the very claim. The Trials were just another instance of society looking for a scapegoat, a group of people who could be blamed for bigger, more complex problems. Then, it was “witches” (women who owned land, or had power, or others who somehow differed from social expectations). Now… well, it doesn’t take much to think of the groups we blame today for social ills that are in reality complex and systemic. The echoes are in many ways too eerie, too close to what we’d like to think is the distant past, a “hysteria” the likes of which we’ll never see again.

But for all its complexities, Salem has, I think, a profoundly magical and healing energy. Stepping outside my routine in that space let me lean into the discomfort of unfamiliar places and people in a way I often struggle to. 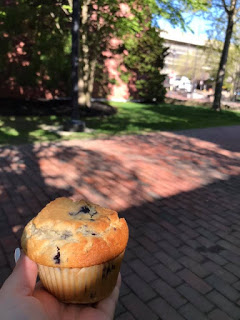 I took time for solitary rambles in the morning and even enjoyed a fresh, still-warm muffin on a park bench. Sitting there in the early morning sunshine, I tried to remember the last time I’d truly taken a break. It felt good to lean in to my quiet for once. So, when I wanted to sit quietly in a corner and journal, I did.

Throughout the weekend, we spent a lot of time doing visualizations and other activities, thinking about the future lives we wanted to create, our intentions for leading our best lives.

The thing about life when you’re an academically-minded person is that you start out with a lot of clear, external goals and deadlines. You learn to measure your worth this way. Graduate high school with honors, get into college, graduate college, get into graduate school, earn your Master’s Degree. But once you enter this nebulous stage called life, the check-in points become less clearly defined.

It’s easy to tell yourself you’re doing well, that you’re on track, with an A on your report card. With an acceptance letter from your dream University. With checkboxes next to required courses on your Degree checklist.

But once you enter “the real world” as we so often call it, how do you measure success? Sure, you can get a glowing performance review on the job, or receive praise from your boss or coworkers. But that doesn’t have the same Point A to Point B feeling that you get throughout an academic career. That sense of trajectory, of forward momentum becomes… well, vague.

I’m at that point in my life now. I have a stable job at a University I adore. I am honored and blessed and so, so lucky to be teaching the two college courses I’ve dreamed of teaching for years. So often I forget, in the hectic dash to plan an event or finish a report or submit grades on time, that so much of this is what I strove for. It’s the why behind so many steps along my path.

No one lays the path at my feet anymore. This life, now, is what I make it.

On our last evening together in Salem, we sat down for a future life visualization exercise. I didn’t see clearly defined checkpoints here, either. Instead, my mind focused in on the small steps, the little things to help me build a life. A living space that feels like home, with people who feel like home within it. A garden to cultivate. A dog to join me on my long walks.  So while I didn’t gain some magical insight to “what’s next” I was reminded of the simple, innate thing all of us human beings here on this planet want: to be happy.

So, yes I want to run a half marathon and yes I want to shed enough weight for this body to feel like home again. But most of all, I want to remember what it’s like to take time to enjoy the things that bring me joy, to be rather than to always, always do.