Earlier this year, my boyfriend and I signed up for Pittsburgh’s Great Race 10K, one of the largest standalone 10Ks in the nation. It would be my 3rd 10K and Andy’s first race. I was excited to take on this distance again, and hopeful that 2020 would become my Half Marathon year. Admittedly, I was previous nervous to race with Andy, since he is faster than me and has more endurance, and I have a history of getting in fights with men who refuse to leave me behind when I’m struggling in a race.

And then, 2019 hit me like a ton of bricks. First, shoulder and back injuries and issues. Then, some knee stuff. And finally, the onset of a mysterious and chronic condition known as occipital neuralgia. Do I sound like a broken record? Well, I feel like one.

Needless to say, this put one hell of a damper on my training plans. I tested a few short runs to see if they brought on any neuralgia symptoms–they did not. But, I remained scared and sheepish in my body. It felt alien to me. Here I was, a 27-year-old woman who’d always boasted of her health. “I never get sick,” I’d say, and it was mostly true. And then, suddenly, I was re-evaluating what healthy meant. Healthy was a good day, or a week with a few good days in a row. Bad days became a regular occurrence. I was afraid of this body, this body that seemed to be failing me. I didn’t want to push it, to run longer distances.

I didn’t want to learn that I couldn’t.

But, I didn’t want to defer or cancel my race, either. Some small part of me wanted to push it, to prove to myself and my body that we could still do this. That slow and steady could win (okay, finish) the race.

Race day dawned with me having a cold, as well. I drove to the pharmacy for some cold medicine and suited up for the race along with Andy. I kept telling him to leave me behind if it looked like I was going to get swept. He kept saying he wouldn’t.

We started strong enough, but I could feel my body resisting the race. My heart rate was elevated from getting sick, making exertion difficult and a little bit terrifying. I knew I wouldn’t be able to run the whole distance. I feared we wouldn’t walk fast enough to stay ahead of the race closing time of 12:00 minutes/mile (my standard pace for run/walk intervals is a little under 11:30).

I want to say the race was liberating, a beautiful celebration of what my body could still manage. But, it was more of a brutal grueling slog that tested my willpower and Andy’s patience.

My refrains were “We’re going to get swept” and “Please go on without me” and “That’s all I’ve got.” As more and more runners passed us by, my fears increased. I don’t know why, but the thought of being swept off the course just terrified me. It felt like the biggest embarrassment, a failure. It felt like confirmation that I can’t do what I used to do before this year hit me.

And then, something clicked in. We passed the halfway point, conquered the last big hill, and I began to think we might be able to finish the race ahead of the cutoff. Refusing to look behind me again, I dug deep for reserves for a few more jogging pushes to up our speed. Andy wouldn’t let me quit, telling me we could do it (though he later told me he could see the motorcade at our backs and wasn’t so sure). 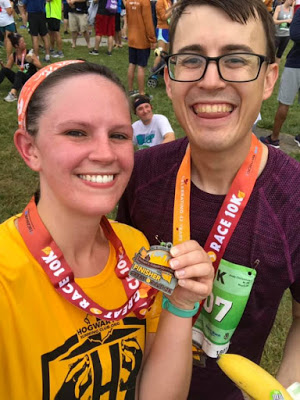 Even though I was in misery and doubt through the entire race, my finish line photos show the biggest smile I’ve ever had at the end of a race. I had done what I truly didn’t think I could, and even if it’s not a time for the record books, it felt like a turning point. Like a reminder that I don’t have to give up on running just because I get these weird, stabbing headaches. Like a promise that, even if “healthy” looks different for a while as I work to navigate my new reality, there are some things that I can have again. I just have to be a little brave and push myself a little bit more than I used to.

Of course, the next day my body’s cold fought back with a vengeance. I was miserable, limping around the house, sore and even running a fever, which I haven’t done since I was a child. It was a real reminder to work with my body, not against it.

I can’t promise myself anything about 2020, because turning over the calendar year won’t mean anything to my body. But I’m hoping the timeline for occipital neuralgia (often healing in around 3 months) will be true for me. I’m hoping that if not, I’m able to learn my triggers and manage my symptoms. I’m trying, trying, to get back to running and doing the things I love to do, with and not in spite of my body.

Here’s hoping you’ll join me along for the ride, my friends.