This past Saturday morning, I did something that past Amanda would probably have considered near impossible.

I woke up at 5am to have my Superhero muffins and coffee, layered up, stretched, tied up my shoes, and headed out the door to meet a local chapter of Trail Sisters for a morning run. At 7am. In the snow. On a Saturday. 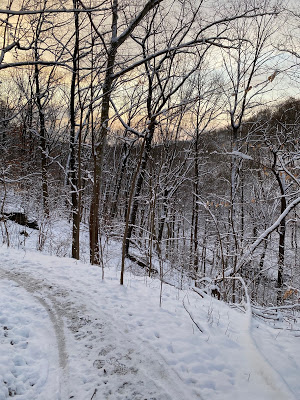 Since I started running, I’ve wanted to try running with a group. While I have a lovely virtual running community, sometimes I feel a bit lonely as the only runner in my IRL friend group (that I’m aware of).

So, I spent most of last year finding and following local running groups on Facebook, but never quite plucking up the courage to join them for any of their runs. Sometimes because the distance was daunting, other times because the timing didn’t work out, or didn’t fit with my training schedule, but most often because I have social anxiety and entering unknown social situations scares the heck out of me.

In addition to my social fears, there’s also the fact that a certain type of runner would consider my pace laughably slow. I’ve heard stories about runners like me getting “dropped” (left behind) on group runs, and the idea of being dropped in unknown territory terrified me.

Then I found the Trail Sisters page and realized they often run in Frick Park, which is within walking distance from me. I have hiked those trails many, many times in my tenure as a Pittsburgh resident, so I felt confident that even if I got dropped, I would be absolutely okay to get home on my own.

The group being all female also helped, because as much as I’ve enjoyed getting to know the guys I play D&D with, the thought of running with untested men makes me a bit nervous. Guys can be assholes, most especially when you don’t have the physique they consider necessary to participate in whatever physical activity they’re currently up to. I remember gym class all too well, it seems.

So, when I saw the post about a 7am Saturday run in the park, on the day my training schedule was asking me to run a longer time than I’d ever run before, I knew there were no excuses. In fact, it was meant to be.

On Friday, it snowed a good three inches in Pittsburgh. I have never run in the snow and don’t have spikes or any snow running equipment. Normally on a day like Saturday, I would just have run on the treadmill, but an hour and ten minutes of that seemed mind numbing. Not to mention, the Planet Fitness treadmills shut off at an hour in.

With a little encouragement from Andy, I replied to the post that I would join and that it would be my first time with the group. Immediately, the admin commented her cell phone number in case I needed it.

This is going to be okay, I thought.

And then, as always happens when I commit to something in a fleeting moment of bravery, I spent the next several hours with low-grade background anxiety about what I had done. What if the other women were faster than me? What if there were super secret trail running rules I didn’t know? Or rules for running with a group in general?

The morning dawned cold, the sun barely on its way up as we prepped to head to Frick. I got out of the car, said hello, and immediately learned that the average pace of most of the women was in the 11:30 min/mile range–exactly my pace. I wouldn’t get dropped. It would be okay. 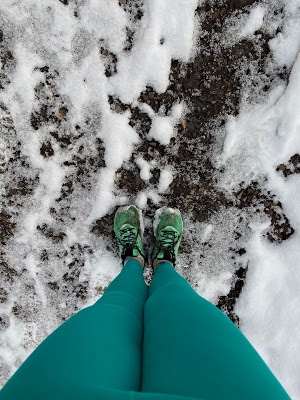 And thus, in 23 degree weather with snow coating the grounds, I ran on the trails in Frick I normally reserve only for hiking. The narrow, steep, winding trails I’d never dream of running.

I couldn’t tell when I last had this much fun on a run.

The park was truly a winter wonderland, and the time and miles flew by in conversation with these two women, both of whom were much older than me and more avid trail and distance runners. My running groups online are mostly composed of shorter distance runners like me, or marathoners at most, so it was fascinating to hear their stories about 50K trail runs and ultras.

When we weren’t talking, we were just running silently through the trails, picking our way carefully over the snow. I have very rarely run without my headphones in, and as much as I love Panic! and Lizzo and Cardi B providing the backdrop for my runs, there was something special about simply being with the trail. I understood at once why some people are avid trail runners–there’s so much to look at, to focus on. Like hiking, but faster. It quickly became a meditative state for me.

We stopped to walk often in icy areas, and stopped for photos of the gorgeous snow covered trees. The group leader mapped our path so we ended up right at the entrance of the park closest to where I live as we hit 5 miles, my goal distance for the day. I said goodbye and wished them well on the remainder of their 18 mile (!!) run.

I am always so glad when the things I force myself to do against all the fear turn out this well. As I stripped out of my mud soaked leggings and shoes, I felt so proud of myself for not only running what RunKeeper assures me is my longest duration, but also for breaking though my fear of group running to try it out. Hopefully, I’ve found a group of women I will run with again.