As you may have noticed, this post comes a little later than the usual Sunday morning. I ended up taking a long hike with my fiancé and my pup that resulted in my being just too tired by the time we got back. So, my apologies for the delay, and without further ado, let’s get on with it!

This week is extra special not only because it’s my first Great British Blog Off bake of 2021, but also because I was joined (virtually) by my real life friend Mel, who writes the phenomenal travel blog The Scaredy Cat’s Guide to Travel.

Mel and I watched many an episode of Bake Off together in our roommate days and were often inspired to bake (or grab dessert from the Whole Foods down the street) as a result. So, it seemed fitting to collaborate for a bakealong!

Since I began this self-designed challenge, I don’t think there’s been a week where I’ve thought less about the bake to come. This is mainly due to three things:

Needless to say, the first week of January went by quickly and bake day caught me off guard with its sudden arrival.

This week earns the award for requiring two separate trips to stock up on ingredients. When I went to Fresh Market, I wrongly assumed that our current carton of eggs would last the week with four eggs standing for my bake.
Come Saturday, I realized that was not the case and had to run out to the grocery to get another carton. Thankfully, we’ve started doing our weekly grocery shop on Saturdays instead of Sundays, so I just folded this in with our other supplies for the week.
The interesting ingredient for this bake was dark muscovado sugar, which I’ve never used before and was only able to locate in the Fresh Market baking aisle.
We also needed instant coffee, which might be an unusual pantry item for some, but I happened to have plenty left over from Andy and I’s backpacking adventure over the summer.
With everything gathered together and a time set for the Zoom bakealong, I was ready to go.

The first bake of 2021 brought with it a few other firsts. The first time I baked along in real time with a friend via Zoom, and the first time I had to completely re-make an element due to it coming out entirely wrong the first go.
Setup was a bit more complicated as I made room for my laptop in addition to the cookbook, ingredients, and stand mixer. One of the joys of being tall is that the angle of a laptop camera to your face from a kitchen counter is… not a flattering one. I forgot to take a screenshot of our baking adventure on account of fiddling with the angle so much, so here’s a lovely 3.5 year old travel photo of us in Iceland in homage to her travel blog. 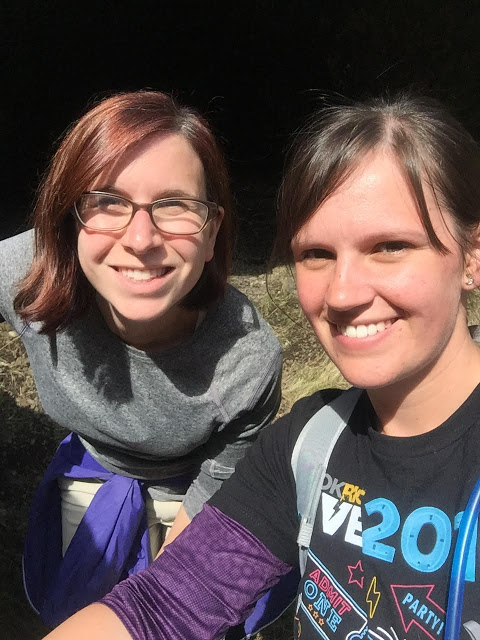 Having a friend along made the baking experience that much more enjoyable.
It was, however, also an adjustment from talking to myself via Instagram like I’ve done previous weeks. I found myself reading instructions aloud to make sure we were on the same page, and caught myself acting like a baking instructor and occasionally giving suggestions as if Mel was a student and I’m some kind of expert.
In spite of the extra set of eyes on the bake, this time around, as Mel puts it “basically everything that could go wrong did go wrong.”
I felt relatively confident about my batter as I spooned in into the cake tin, eyeballing 2/3rds of it because the ability to measure and more precisely determine what 2/3rds of the batter was simply did not occur to me as an option.
What I discovered when it came time to spread the remaining batter over the sprinkled filling was:
The result was a speckled top layer with bits of instant coffee and muscovado sugar peppered throughout. Probably fine, right? 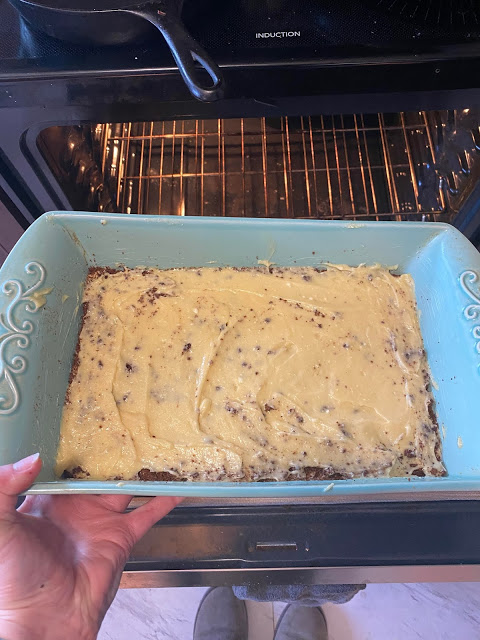 Well… it certainly led to some interesting occurrences in the oven, in that the center of my cake ended up with a ring of sugar/coffee around it, forming what looked like a second cake inside the first cake. 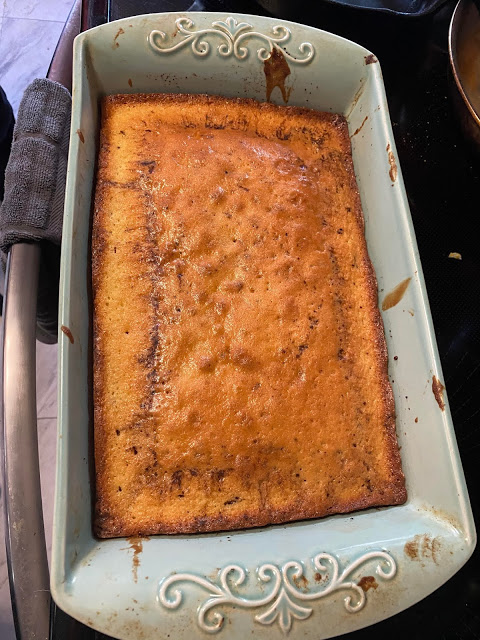 Upon flipping the cake out of the pan, I noted specks of filling all along the bottom that suggested it had sunk through. I’m not sure if it was meant to end up streaked through the cake, but I certainly don’t think it was intended to form chunks of solid crust along the bottom. As Mel and I had very different cake batter consistencies going in, I’m guessing mine was a bit too thin.
The final step of the bake proved the most complicated–creating the praline topping. I did not know, prior to Googling it, what praline was, and have certainly never made it before. The instructions seemed easy enough, but once we got underway things did not go to plan.
The mixture is supposed to be swirled in the pan rather than stirred because of science or something. Mine was much too thick, the consistency a bit like peanut butter, for swirling to be a viable option, though I was hopeful the heat would help it. When it didn’t, I resorted to gentle occasional stirring.
Eventually it went hard, lumpy, and grainy before ever starting to “lightly caramelize” as we were promised. Like many a contestant in the tent, I had to scrap it and start again. At this point, Mel had to log off, and I was alone with my frustration as I began again. The second time had to be the charm because I didn’t have enough slivered almonds for a third go.
It went… better. The praline topping was easier to swirl the second time around, and it appeared to be caramelizing a bit. But as I went to spread it on the cake, it quickly became grainy. Another google search suggested grainy praline is a common problem, but I was nevertheless a bit disappointed with the final look of my cake this week, with its sad dropped filling and grainy crumbles of praline. 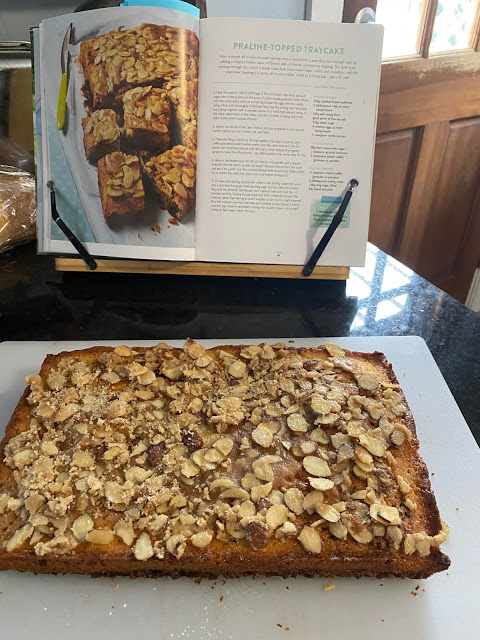 Thankfully, the cake at least tasted delicious, a flavor reminiscent of coffee cake but with a sweet nutty topping instead of the usual cinnamon crumbs. As long as the bake is edible, I try to tell myself it’s a win!

Surprise new section for this week’s post! Mel was kind enough to provide me with her take on the experience. Here, she gives us her top takeaways from the experience:
“Some things I learned from this baking adventure, which really was so much fun (and did I mention
delicious?):
It was a pleasure getting to share this baking experience with my friend and fellow GBBO enthusiast, and even though I wish it could’ve been smooth sailing for both of us, I’m kind of glad the first bake to go badly wrong happened with company.
Join me next week as I discover whether it’s possible to find rhubarb out of season in Pittsburgh or if I have to skip a recipe and pivot until it’s in season again.