I know this post is coming to you a bit later than scheduled, but January has been, well.. a lot. The tension leading up to the presidential inauguration knotted up with continued exhaustion from the pandemic has underscored a slow start to the semester as students undergo entry testing, and I feel a bit like I’m floating outside of time.

In spite of having a three-day weekend to look forward, I reached Friday feeling utterly drained and lacking in enthusiasm.

In spite of my low energy levels, I’ve continued with my New Year’s fitness challenges of the Yoga With Adriene 30 Day Journey, Breath, and the PB21 program from Bad Yogi. This leaves my body feeling sore and strong, intermittently and sometimes simultaneously.

Last week, I also added in the beginning of training for the BadassLadyGang winter racing series, which sounds like a lot but I promise you they all fit together more neatly than you’d think with the staggered start dates and rest days.

Other than spending a lot of time on my yoga mat and treadmill, respectively, I don’t have too much to report from my personal sphere of existence.

So, without further ado, let’s get to the bake!

This week’s baking prep required a great deal more flexibility than usual, including the creation of not one but two separate lists for my trip to the Fresh Market.

I spent the week wondering & Googling about the viability of finding rhubarb in the US at this time of year, and knew the odds weren’t in my favor. Whether I would end up baking a rhubarb Bundt cake or a triple ginger cake was an open question and I went ahead and prepared a list for the next recipe on deck, just in case.

I have never actually eaten rhubarb, and primarily associate it as a running joke in an episode of some TV show I watched long ago… I think perhaps Danny Phantom? Even if it was in season, I’m not particularly well equipped to know where to look, though I’m told a farmer’s market is the way to go.

Google suggested the best place to search this time of year would be the freezer section. I checked in Giant Eagle during my regular shopping trip, and then headed to the freezers first thing in Fresh Market to make the final call on which recipe I’d be baking this week.

As you may have guessed from the title of this blog post, my search proved fruitless (eh? Fruitless? Is rhubarb a fruit? Honestly, no idea).

What I didn’t think to plan for was the possibility that the backup recipe would also feature an obscure (in the US) ingredient: stem ginger.

With no sign of it on the shelves and no forethought for a third backup plan, I found myself rounding up ingredients for homemade stem ginger in addition to those listed in the cake recipe itself.

And thus, this week’s bake takes the cake (eh?) for the longest active time yet.

Being someone who doesn’t really care for gingerbread, the thought of a triple ginger cake didn’t exactly get me out of bed in the morning. I slowly dragged myself into the kitchen on Sunday, determined to get through both the creation of stem ginger and the bake itself over the course of the day.
As it turns out, peeling and chopping and simmering ginger for about three hours took about as much energy as I had to give in the kitchen. I set my cookbook aside and popped the stem ginger into the fridge, thankful that Martin Luther King Day meant I would have the day off on Monday and could push back my bake.
Marginally more awake and a loaf of sourdough fresh out of the oven, I began the bake in earnest on Monday morning. Like many of the cake recipes thus far, it wasn’t nearly as complicated as I expected. The worst part, in my opinion, was heating molasses and grated ginger over the stovetop, because I do not like the smell of molasses. Or ginger, for that matter. 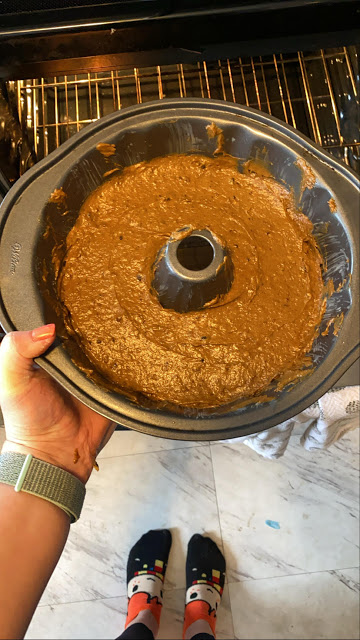 The ingredients assembled together into a batter that looked like a liquid form of gingerbread cookie dough, which I supposed meant I’d gotten it more or less correct. I tossed it into the oven and rolled out my mat for some yoga while it baked. I remain surprised at how long many of these cakes spend in the oven. 40-45 minutes seems so long for a cake for some reason.
It came out looking a great deal like the picture in the book, which was exciting, and popped right out of the Bundt pan with ease (2/2 on that front so far!). From there, only the frosting remained. 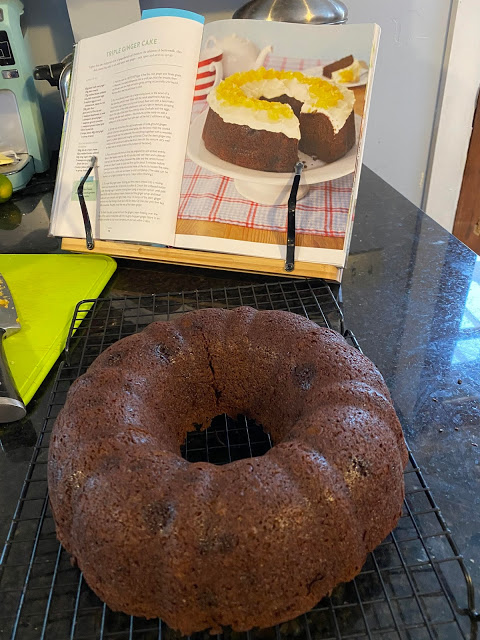 The frosting… turned out to be a bit of a problem. In theory, creaming together butter, sugar, cream cheese, and stem ginger syrup sounded easy. But doing it by hand with a wooden spoon with “I’ve done yoga every day for two months” arms took a while, and the result was a bit on the lumpy side. A quick taste showed that the icing tasted fine, so I popped it in the fridge to chill.
I’m a little disappointed once again, since the frosting’s little lumps make it less than picture perfect, and the homemade stem ginger isn’t quite as bright and cheerful yellow as the picture. I remain uncertain if that’s because mine was homemade or due to some clever lighting and photo editing on the part of the cookbook photographer.

Nevertheless, the bake tasted quite a bit better than I expected, given that I don’t care for gingerbread. The ginger flavor is milder, the molasses less pronounced, and the cream cheese frosting makes a nice accompaniment, lumps and all.